The Path to Prague: Why it all started at the end of the Colonel

The journey to the infamous Prague Incident began way before Chuck downloaded Intersect 2.0. It actually started when Orion took out the original Intersect. There was a scene that foreshadowed the upcoming turmoil for Chuck and Sarah. A change was coming and they didn’t even know it was happening. This article will be about the connection between Chuck vs the Colonial through Chuck vs The Pink Slip, and why at the train station Chuck had already made the tough decision that would ultimately create distance between the two.

In the beginning of the Colonial, we see Chuck and Sarah on the run. The mission was to rescue Stephen J. Bartowski, which leads to a dead end because unbeknownst to them the hideout was underground. They check into a hotel. Sarah once again shows wiliness to share a bed with Chuck. Sometimes that Chuck was still uncomfortable with especially when she is only in her underwear. It is quite comical to see Chuck make notion to sleep on the floor.  The next morning the most magical moment happen for the both of them. It is not the kissing session they engage in. It is more about Sarah reaching for Chuck’s hand. The first sign of intimacy from Sarah.

It was a positive sign that Sarah has shown some feelings towards Chuck, and it was well received by him. However, the problem is much like other times work gets in the way. This time Casey interrupts the festivities. Casey arrests the two of them and brings them back to Castle. Meanwhile. Orion signals Chuck to come back at 12 because of Roark planning to create a intersect army. 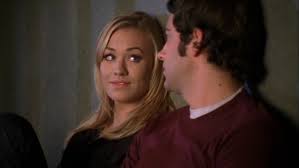 We have another intimate moment from Chuck and Sarah. A simple expression of feelings inside a holding cell. This was the beginning of Sarah starting to want to pursue a relationship with Chuck. Sarah’s eyes have nothing but love in them now and she is beginning to not be afraid of showing them to Chuck, which Chuck is beginning to see as well.

Chuck Bartowski: For whatever it’s worth, if I have to spend the rest of my days in a dark windowless room, I can’t think of a better person to spend it with.

Sarah Walker: Not really how this works.

Sarah Walker is opening her heart to Chuck for the first time. However, once they get back to Barstow, Chuck’s father was rescued, while Chuck went to stop Roark from accomplishing his evil plot, and in the meantime, Orion tells Chuck to look at the screen. Chuck does and it wipes out the Intersect, which everyone is happy right?

Not really let me show you.  I have watched this episode many times, and I never notice the back of them. The explosion happens as Orion is saying

Orion: Its out son, you’re free. 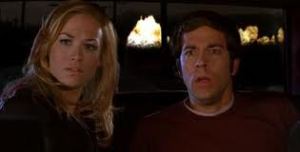 Chuck and Sarah’s dreams are blown up. Sarah realizing that she will never see Chuck anymore and Chuck not having the Intersect means he loses Sarah. The only way to fix this would be if the government asked Chuck to join the agency as an analysis. However, Chuck turns them down much to the chagrin from Sarah.  She saw it as an opportunity to still be with Chuck.

Throw in the General telling Sarah that she will be working with Bryce on the new Intersect Project and that she was leaving in the morning made Sarah depressed. You can tell in her eyes that she is lost for words. Her world is being turned upside down and for the first time in her life Sarah does not want to leave an assignment. Most importantly she does not want to leave Chuck.

In my view, the season two finale was when we begin to see Sarah expressing her desire for Chuck and falling in love with him. The presence of Bryce didn’t even deter her feelings anymore. Which is when we get to another key scene that also leads us to the decision made in Prague. 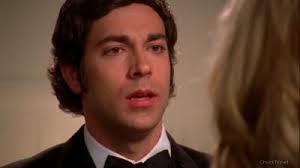 Chuck’s eyes as Sarah tell him that she was leaving in the morning and with Bryce was something Chuck was not expecting to hear after he requested to go on a vacation with him. This is where Chuck made a mistake. He didn’t express how he wanted to not only go on a vacation with Sarah, but he wanted her in his life. It almost seemed like a vacation was the easier thing to say, which in reality was something that was always wrong with Chuck and Sarah. Their unwillingness to acknowledge what they were feeling and tell the other was what was holding them back. It was not like the love was not there. The eyes tell you everything especially for Sarah, who watches Chuck walk away from her saying

Chuck: Thanks for coming, it’s good for the cover.

For Chuck we have begun to see the frustration take its toll even for a man that knew how to keep his cool, but what he doesn’t see is the pain in Sarah eyes. Her eyes wet with tears because she was not there on an assignment she was at Elle’s Wedding as his date and so much wants to tell him that she wanted to be with him.

When they get to the reception, Sarah offers Chuck a chance to dance, and while dancing Sarah eyes tell the story. Closed and enjoying the moment. It is a feeling of being where she wants to be. There is nothing like it. She has never felt this way before.

What I find beautiful about the look Sarah has on her face was a transition look. As she comes into his arms she has proclaim herself as his girlfriend. It has not been spoken yet, but Sarah has happiness, love and most importantly has Chuck in her arms. In his arms she wants to stay.

Chuck Bartowski: You belong out there. Save the world. I’m just – I’m just not that guy.

Sarah Walker: How many times do you have to be a hero to realize that you *are* that guy?

Chuck Bartowski: But I want more Sarah. I want a life. I want a real life.

Sarah Walker: Chuck, I don’t want to save the world. I want –

Sarah was going to tell him that she was not going to leave, and want to stay and see how they feel about each other. This was a big step for Sarah because she refused orders and told Bryce she was not coming.

As the path continues, Chuck is thinking about how he was losing Sarah to Bryce and the CIA. There is only one thing he can do, which is when given the choice this time. He downloaded the Intersect 2.0. For Chuck it was about being able to be with Sarah, and he needed to enter her world in order to do it, but Chuck never gave Sarah a chance to explain her side. Like he will say to Sarah in Chuck vs the Other Guy.  I never asked you an important question.

As good as it was for Chuck to download the new intersect, Sarah was not happy about it. She didn’t want him to be a part of this world. In her eyes, the normal life he was living was what she wanted, and by him deciding to enter her world, she was losing that chance.

The feelings were there, but the fact that they did not communicate it to each other was where the problem really was. This of course until Sarah decided to take action. She asked Chuck to run with her and unfortunately for Sarah, even Chuck was capable of letting her down. He did what she did for the last two years.

He chose duty over her.  He explained that he did it for the sake of helping others and for the chance to be with Sarah because he loved her, but he never listened to what she was saying. Look at what she told him

Sarah Walker: We could run? You and me. We go now and never look back.

Chuck Bartowski: Are you serious?

Sarah Walker: I have some money saved up. I’d have to get us some new identities. Create an escape route. For now go to the training facility in Prague. Then meet me in the Nadrazzi Train Station in 3 weeks time at 7:00. And then I can figure out the rest later.

Chuck Bartowski: What are you saying?

Sarah Walker: I’m saying I want to be a real person again, with you. That’s what you want, right? I mean this is it, Chuck. Will you run away with me?

She is not asking him to join her world..She is telling him I want out and start a life with you. She explained to him the downside of being a spy.  How every city is a new mission and new Identity, soon you will lose yourself.

Chuck Bartowski: [Thinks about it] Yeah.

Finally, we arrived at Prague. Sarah is waiting for Chuck, which he arrives, but he is not the same Chuck that told his father that he loved her. He came as Agent Walker.  Three simple words that would pay the way for the entire season 3

Sarah Walker: this is simple. This is a real life… We have to go Chuck… Are you coming?

Chuck said I can’t, something she told Chuck for two years now has turned against her. The road that followed really began four weeks prior to Prague. WE just didn’t notice.