The Good, the Bad and the Ugly of Chuck Bartowski

Over the course of the next three week, I will embark on a mini-series of sorts. The topic that will be explored is the three sides of Chuck Bartowski. These three sides help shape and mold who we know as our king of the nerds.

First, let me say Zachery Levi’s acting is top notch. His conversational skills and delivery are masterful, and throw in Yvonne Strahovski and we get great television at its best. Chuck and Sarah are hard to talk about without including the other, and you know what?  That is a good thing. Most stories of love and romance are like that. For example, you can’t talk about Romeo without Juliet and you can’t talk about Noah without Allie and for Sarah Walker we can’t talk about her without her Chuck

So, what do I hope to gain from this, well in order to appreciate the story you need to understand that there are three sides to Chuck Bartowski, The good, bad and sometimes really ugly.

The good side of Chuck was how he was able to defuse a bomb by downloading an internet virus. He also has a kind heart and wiliness to help others such as the little ballerina He is as Casey describes him as a social butterfly. Thus, when he is out with Sarah on their first date. He can’t help but put on his vast display of charms and personality. Something she can’t resist especially with this line from Chuck.

Sarah: I just came out of a long relationship, so I may come with baggage.

Chuck: Well I can be your very own baggage carrier

[Sarah shocked and smiles at the same time]

What is funny about this scene is how Chuck looks after saying it. He looked like he spoke what he was thinking. Classic Bartowski. So, what were the very things Sarah claimed made Chuck great.

What made Chuck special was his desire to help others no matter how big the situation was for him. He always figured a way to fix things. Even in the spy world, he always tried to help those that were in need no matter the cost to himself or those around him. For example, In the Truth, he gave the antidote to Ellie to save her. He sacrificed himself in order to protect his family.

What I remember most about this scene is how Sarah watches from the window. As superspies, Casey and Sarah were taught to think for yourself or you will die or worse. What I mean by worse is the mission fails and the bad guys get away. Sacrifice is a good word for the beginning of Chuck’s journey. When Bryce sent him the email filled with government secrets later to be called the Intersect, he sacrifices a great deal to maintain his friends and family separate from his new world. Something that proves to be both difficult and hardship.

He sacrifices disappointment from his sister and alienates Morgan for the greater good, but when they have problems he is still there for them. He shows Sarah and Casey when it comes to friends and family sometimes you have to break the rules of protocol like he did in Santa Clause and Best Friend, and for five seconds both Sarah and Casey thought his sacrifice cost him his life. Something Sarah and even Casey can’t handle. Especially for Sarah, who is falling in love with him more and more as she is with him. 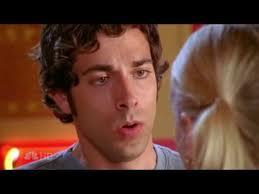 Sacrifice also means breaking up with a woman, who he clearly loves because it is the right thing to do at the time. The first time Chuck breaks up with Sarah it was because he wanted something real, but what he does not see is how Sarah was not ready to hear those words, and furthermore seeing him engaging another woman was too much for her even if it was just a cover. I call the truth the awakening of Sarah’s feelings.

Chuck didn’t break up with Sarah just once.  He did it multiple times and the others I will leave them for my discussion about the bad side of Chuck. For Sarah, it is a new world for her. She is use to partners that follow the particulars of an assignment and never have questioned orders, but Chuck always does it. He is not afraid to confront the government, Sarah and sometimes with Casey, but gingerly. He voices his opinion when the government wanted to keep Orion from him, and he also does not tell Sarah about his search for Orion, which bothers Sarah for not including her in on his search.

Sarah loves to protect Chuck and often this leads to Chuck doing things on his own because he knows Sarah would stop him. Especially if there is a risk of him getting hurt. However, each time he does work on his own he constructs master plans that wins wars with the Ring, Fulcrum and Volkoff Industries. However, his biggest victory was being able to take down Shaw and his plan to take over the CIA. Once more the success of these plans don’t include the use of the Intersect.

At times for Chuck, he uses the program as a crutch, and he uses it as an excuse for not being able to work properly, but both Casey and Sarah let him know that before all that he was smart, and to focus on the mission at hand.  I feel his best work was securing the Hydra network on Orion’s computer and taking down Volkoff.  He said,

Chuck Bartowski: [to Volkoff] Technically, I guess you could say, that in the end it was Stephen J. Bartowski who took you down. Fitting don’t you think? You know my father, he taught me a lot of things like: looks can be deceiving. Fight for your family. And of course, never use a gun unless you absolutely have to.

Chuck Bartowski: Yeah, I probably should have told you, I have this thing about bullets. I was never going to kill you, Alexi. After all, I am my father’s son, aren’t I?

No Chuck, your father spent years trying to stop Alexi Volkoff, it was you who came up with the plan and was able to lure Alexi into your dad’s cabin. Orion started it, and Chuck finished it.

Sarah and Casey taught everything Chuck knew about spying, and he returned the favor by teaching them how to live a normal life.  This is probably the most significant contribution to the story. They trained him to be spy and he taught them normal existence, Sarah learned every day that she wanted Chuck and his normalcy and Casey learned how to handle meeting his daughter for the first time. Chuck even helped Casey through the Ilsa revelation.

Several times Chuck risked treason for the sake of helping his team. Something that the whole team learns how to do over time. It was hard though especially when TB worked dysfunctional at best.

The nobleness from those actions are what separates Chuck from the rest of the nerdy heroes. He is willing to get dirty no matter how over his head he is for the sake of helping others. The risk could cost him to get kidnapped, and for five days Team Bartowski learned what it would be like without Chuck and neither of them handled it well. Especially for Sarah.

Stay tuned for the discussion on the bad side of Chuck Bartowski.