When it comes to television, we often are subjected to series that should of never made it. We are also faced with shows that “jump the Shark” and the demise is inevitable, but what happens when the fans find a show they still want. The show I am referring to is Chuck.

Chuck met its demise in 2012, yet after two years since its cancellation, the outcry for a return whether it be a new season or a movie has risen from a whisper to a full blown hysteria. On social media people have posted how much they miss the show, and some of us like me re watch all 91 episodes several times.
There are two reasons the fans still love and want the show. The two reasons are simple. People want more Chuck and Sarah Moments and the second a lot of fans still have a bad taste in their mouths on how the show ended. I am one of those people. Here is why.

The Final Scene of Chuck

I often read criticism of season 3 for the whole Shaw/Sarah angle, but the problem was the out of character antics of both Chuck and Sarah. Did the writers regret it? Yes, they admitted they did not like the final product, but for me at least there was closure to that season.

It may had took 12 episodes for Chuck and Sarah to finally take that brave step, but at least we saw it. At least we saw a six month prior to what caused The “Prague Incident” Chuck vs the Pink Slip was concluded with the Other Guy Something I appreciate more, The journey was concluded with a “Your Still My Chuck”
We can talk about the in between plots and devices, but the end result was satisfied. Fast Forward to the final arc.

Quinn wipes out Sarah’s memories and we get one more way the writers attempt to keep our favorite couple apart. Unlike season 3, we don’t get a conclusion. We are left to imagine a kiss would fix everything. This for me was what I like to call Black Screened.

Do you guys remember the finale of The Sopranos? Remember how the scene went black after those guys entered the diner. I was like WTF (What the Frankfurter for all the kids) I was so pissed and screamed at the television it happened again with Chuck. [I will provide a video of it to see what I mean.] The second question I had was what happen to Tony?

The feedback  from the writers/creator of Sopranos was the chance of a movie, well that can’t happen know with the passing of James Gandolfini In other words, James’s death scratched that movie now.

When it came to Chuck vs the Goodbye, Chris Fedak was thrilled with the ending. He said “I wanted the conclusion to be left to the audience.” Really Chris? It looked like a chance for a comeback not a conclusion. 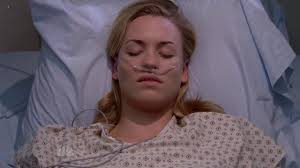 The fans waited for three years for Charah to get past their insecurities. watched another year of them walking the tightrope towards getting married, and when they did the writers screwed around again by coming up with a plan for Sarah to nearly die the day before the wedding, but at least we saw them get married..

The other thing that makes me scratch my head with the finale, the writers took the time to give Morgan a chance to regain his memory, something we saw on screen, but with Sarah we have to speculate whether she remembered? This is the kind of thing that makes people want more. I am sorry Sarah was a more important character than Morgan, but was not treated as such.

Why the need to separate Charah again in the end? My theory is they were never happy with Charah’s romance high jacking the overall story. After Chuck vs the Truth, I never cared for the spy story because it was never going to end, I was interested in seeing how far Sarah would go to claim Chuck as hers. A passionate kiss did the trick, but it did not bring them together because Bryce returned, but we are supposed to accept a kiss to fix everything in the end.” This was bad way to end a show. A bad way for fans who cared to feel left at the altar. A feeling that needs to be rectified.

I want more Chuck because we need to see a valid conclusion. We need another “You’re still my Chuck” moment. Speaking of moments, fans want to see more Chuck and Sarah scenes. The chemistry Zac and Yvonne showed on camera was brilliantly done only Yvonne and Michael C Hall came close, but we are talking about three great actors.

We need to see more scenes like Phased Three, A tearful Sarah trying to wake Chuck. Or Chuck telling Decker I am the intersect in order to save Sarah from dying. We need to see an after spy life for these two. They deserve it, the fans deserve it. The hard work put into the characters by the actors and the passion created from the fans prove that the show is still missed.

Don’t believe me visit YouTube, and see how main times Charah scenes are viewed and commented on. Look at how many blog sites like this one. The fire is still burning for a show the fans can’t have. Unlike Soprano fans, we Chuck fans still have chance at a movie, but if we wait too long we will remained Black Screened.