Chuck vs The Undercover Lover

The first Casey–centered episode, and the first love interest of Casey. Ilsa Trinchina, who was played by Ivana Milicevic.  For Casey, love does not come very often, and when it does something usually happens. In the case of Ilsa, Casey was under the impression that she was killed in an explosion back in 2004.

hen Chuck tells Casey about his flash, Casey gets very defensive and becomes hostile towards Chuck.  He didn’t know Casey witnessed Ilsa die way back when, but a shocked Casey couldn’t control himself.  Chuck recruited Sarah in hopes of learning the backstory of the two love birds, But Sarah learned the truth about Illsa being dead, and warned Chuck to back off. Chuck feels bad about teasing Casey, and apologizes

The team is given an assignment to do some recon on the baddies that Chuck flashed on, and one of Sarah’s best dresses of series was on display.

Chuck spots Illsa, which caused Casey to bump into her. Being told that she was alive is one thing, but actually seeing her was another, Casey was not prepared and asked her how did she survive the blast.

The reason for the bad guy convention is soon revealed to be the wedding of Ilsa to Victor Federov  the head of the Russian crime syndicate.  The next morning Chuck and Casey share a bonding moment and one of Chuck/Casey funny moments of the series.

Its a great moment for Casey and Chuck. It is the first real bonding moment for the two, and it was well received by both  Chuck counseled Casey into going to the hotel where she was staying and talk with her. “Use your strengths and fight for her.”

Meanwhile. Sarah went to the hotel to plant some bugs and watch the baddies., only to find Chuck and Casey had made there presence felt at the hotel. She bumps into in he hallway. Chuck covered for Casey by saying he couldn’t sleep so he though some spy work would do the trick.

While watching on the monitor, Chuck spots Ilsa sitting alone, Chuck convinces Casey she is sitting at the bar because she is waiting for him.

He furthers Casey need in seeing Ilsa by saying “You don’t want to regret for the rest of your life on the things that you didn’t get to say tonight,.” Unfortunately for Casey Ilsa was not everything she claimed she was. 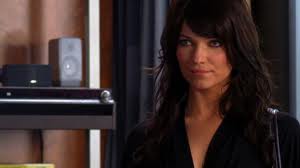 Chuck found out that Ilsa is not who she said she is. She is actually an undercover agent in midst pf a cpver, and for Ilsa, Casey was not who he said he was. Ilsa would come to the buymore and give Casey the token he gave her back in 2004, which would send Casey spiraling.  This is the key part of the episode because it showed how human Casey can be. He is not a robot with no emotions. Sort of like 24’s Jack Bauer.

Think about how Jack’s relationship with Audrey Heller is complicated because of the job he has, and the dedication he puts into it. Casey is the same way, and the truth is they were both in Bosnia working.

The truth about the real ilsa and Casey was realization that a future was not in the cards for them, which is why Casey goes on a drinking binge, and claimed that what he did was for everyone else can have it.  Chuck listened to Casey.

This time they find out that Ilsa was bugged and everything they had disguised was heard. Casey and Chuck head to the hotel to help her, while on the way Chuck calls Sarah.

This segment of the episode is bar far the best sequence of the season. from the time Victor tells Casey and Chuck how they were going to die, Casey quickly comes up with a way to get them out of the situation. Meanwhile, downstairs Sarah is looking for Chuck.

I love this scene because its a tribute scene from Lethal Weapon as Mel Gibson does the same scene,. and it was a cool way to end the main story.

The overall theme of the main story was well done. The first time the story was not on Chuck or Sarah. It also allowed us to look more into who Casey was and understand the reason he becomes so cold to the world.

Of the three women in Casey’s life I feel Ilsa and Verbanski (more on her later) than Kathleen. Grant it he ended up having a daughter with kathleen, but Ilsa just seem like a perfect match for him.

The story of the episode was also fun and entertaining. Devon and Ellie dispute over what to get for their anniversary was comical, and Morgan playing the counselor was stellar, and we also get a nice moment from Ellie and Sarah.

This episode mixes in comedy with action . Something that will be a theme for Chuck.  This episode also gives a glimpse at who Casey was, and the bond Chuck and Casey developed.

Not to much happened between Sarah and Chuck regarding their relationship, but they did work good together. Sarah seeing Chuck and Casey crash into the pool was a great expression from Yvonne, her team nearly dead was troubling for her. Especially Chuck!!!!

Up next the season finale of the first season,,,,,