The Jill Roberts Factor Part One: The Beginning

The Beginning of the Bryce, Chuck, Sarah and Jill connection

Back in the pilot, Chuck reminisced on his ex about how they met. In Chuck vs  Alma Mater, we learn that Chuck was introduced to Jill through Bryce.

This all took place back in 1998, As Bryce Jill and Chuck were first being introduced to each other’s lives. Chuck would end up dating Jill, but by the time Chuck reach senior year came around.

Bryce  was a spy and protecting Chuck, but like Sarah spent time with Chuck personally, and became compromised by becoming a friend rather than just an agent. It opened the eyes of who Bryce was to both Chuck and Sarah. The betrayal on both parts make Chuck and Sarah feel worse when they found out his real intentions.

Yes, he can come off a bit arrogant, but Bryce was usually sent into do covert operations. For example, being sent into Fulcrum to find out who and what they were up too. Fulcrum was dangerous. They also recruited from Stanford. A particular person also linked to both Bryce and Chuck.

That person is Jill Roberts.

As Chuckaholics reaches episode six of our rewatch, it comes time to give Jill Roberts her own feature. A character that often gets mixed in the shuffle because  of what she did to Chuck. She didn’t hurt Chuck once, she did it twice.  over the course of the next three weeks, we will be looking into Jill and her effect on  Chuck, Bryce and Sarah.

After Chuck was kicked out of Stanford, Bryce stayed at Stanford to keep his cover. During that time, Bryce and Jill became an item. which sent Chuck spiraling to the state we find Mr. Bartowski in the pilot.

The two people he thought were his friend and girlfriend end up dating after he leaves. It makes sense why Chuck would lose faith in the world. A super shock to the system for anyone.

The events above took place between the years of 1998 and 2003, and it still lingered with Chuck in 2007. He lost his confidence and mojo as a result. He couldn’t interact with women or wanted to move past Nerd Herding. An effect Jill and Bryce both caused.

While the series never had Jill and Bryce cross paths, but Jill and Bryce have a connection in that Jill was keeping ties on him for Fulcrum. This wasn’t known until Gravitron, but for now let’s focus only on The Ex, Nemesis and Alma Mater since these three episode link Sarah, Bryce, Jill and Chuck together.

When Chuck saw Jill again in 2008, the pain from the experience was still fresh. The wound started to open up again once he saw her. A reaction like this comes from no closure, but could it mean his feelings weren’t quite over. The same can be said for Sarah and Bryce for instance. In Chuck vs Nemesis, Sarah was stuck in Bryce’s trance. The results didn’t end well for Sarah either.

It can be hard to reconnect with an ex  simply because Charah both felt the effect in some capacity. Jill broke up with Chuck because Fulcrum told her too, but not to Chuck. He presumed to believe the tests were the cause. Conversely, Bryce didn’t break up with Sarah, he walked out on her. He didn’t tell her about his covert operation leaving her to clean up his mess; such the life of a spy.

Bryce also was believed to have been killed. Thus,  Sarah’s reunion with Bryce was bit more complex for Sarah, but the same tension heightens either way.

When Chuck reacquainted with Jill, he immediately takes off his Buymore badge so she wouldn’t  see how his life didn’t change since their break up. Chuck being civil put on a smile,but the burn inside of him couldn’t be more obvious. 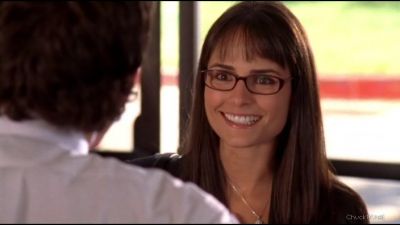 The angst Chuck felt can be seen clearly, but matters will only get worse as he flashed on her boss. Like in Alma Mater, Chuck didn’t want to go through with this mission because it meant he had to dive back into his past. The idea of working on a date with Jill was sending Chuck spiraling. Casey and Sarah had to remind him about orders.

However, it does open the door for Chuck to have an one on one chat with Jill to hash out the million of questions Bartowski had that needed to be answer. The problem of course was this little mission he was going to be on. Sarah listening in on the conversation didn’t help matters, but Chuck’s attack on Jill hit Sarah as well.

Chuck brought Bryce into the conversation which caught the attention of Sarah. For a brief moment, Sarah was personally involved now, but quickly remembered they were on mission no time for lady feelings as Casey would say.

Sarah went to snap Chuck out of the past, and told him he had to think like a spy first, but Chuck fuming with Jill over her actions at Stanford needed an explanation, but Casey made the point on how Jill had the right to dump him.

When Chuck returned to his table, he assured Jill the guy that was up at the bar was kung fued at the bar. It lightened Jill doubts about having this dinner,  and was happy because the Chuck sitting before her was the Chuck she liked. This drew a look from Sarah as she was watching and listening to Jill flirt with Chuck. The connection between the four is made now. As Jill, Chuck and Bryce includes Sarah into the mix.

A nice way to introduce a trapezoid in my opinion, All parts connected organically. All have a connection prior to 07 in some way or another.

Sarah shouldn’t be surprised by Chuck and Jill’s feeling rekindling Since Sarah went through the same thing almost a year ago,, but when feelings are included the parts become difficult to understand. Jealousy becomes ramped by all moving parts.

Chuck watching Sarah being kissed by Bryce is the first domino. Something Bartowski didn’t want to see. The same can be said for Sarah when Jill comes around. The difference was Sarah didn’t hear or see it. Chuck just told her. Completely oblivious of Sarah’s reaction to hearing the news.

It only gets worse for Sarah, as Chuck decided to show up on their stakeout of Guy’s hotel room. Something Chuck never did before. It sent alarms into Sarah’s head.  As Chuck openly volunteered to bring the faulty bug up to Jill’s room.

As Chuck was trying to convince and apologise for the night before,   Sarah had a lot riding personally with Chuck and Jill having one on one time. Lucky for Sarah, she would be able to listen in.

Sarah apparently didn’t remember Lou,  Chuck called himself an idiot and only tried to impress her. He told her the truth about working at the Buymore, and he wasn’t over her.

After saying he wasn’t over her Jill let him. During their discussion Chuck realized Jill might incriminate herself and shut off the bug (Like putting his watch in a glass of water). It will be the first time during this Arc Chuck cut himself off from Sarah when it came to protecting Jill. It won’t be a the last, we’ll save that for the next chapter of this article.

Jill looks into Chuck’s eyes, who like Sarah did in Nemesis fell for his ex’s advances and submitted to her kiss.  Jill kiss Chuck not the other way around. Bryce kissed Sarah, but both didn’t pull away, and felt the effects afterwards. The power an ex has can overpower people with no closure to the past.

Chuck vs The Nemesis is a lot harder on Sarah then Chuck because of how the reunion took place. While Chuck was worried about his current state of affairs with Jill, Sarah had entirely different situation. Especially when it appeared she was looking at a ghost. 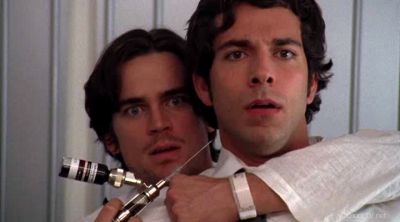 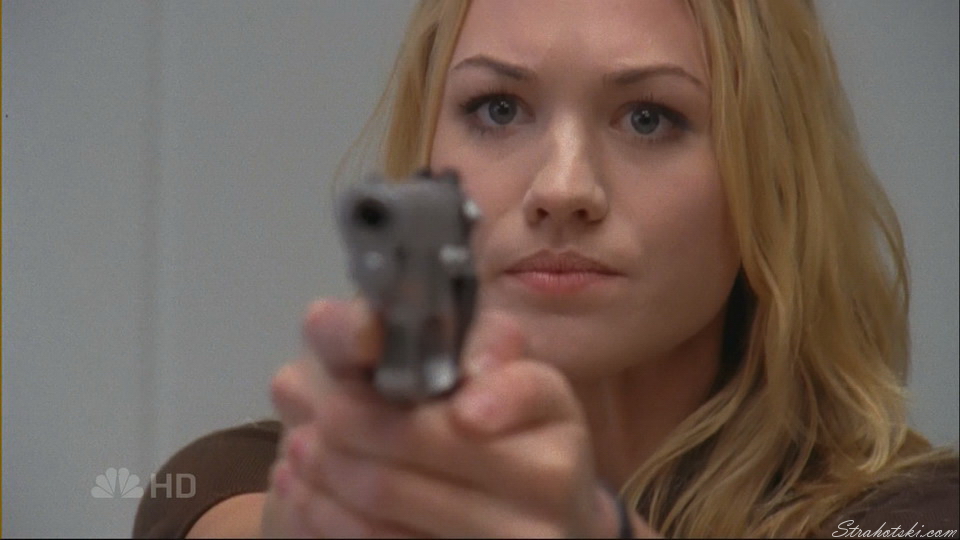 The exes really showed up at the wrong times. Chuck and Sarah engaged in their own passionate moment. It made the tension behind Bryce and Sarah’s kiss hard for Chuck to understand. 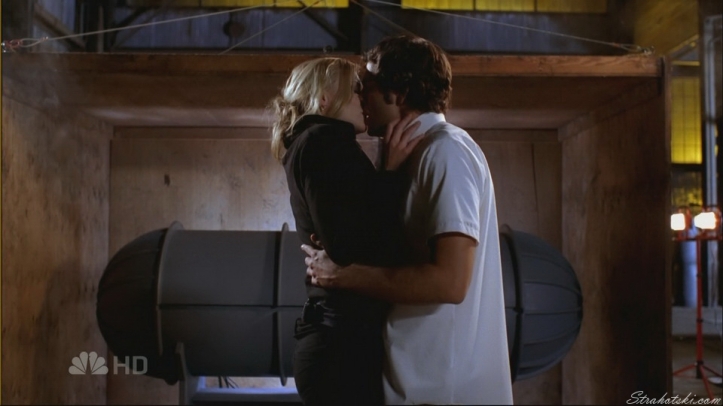 However, Sarah’s last scene before Jill came into the picture was this.  Essentially, Sarah all but told Chuck she was his, he knew it too when he looked back at her. a special moment ruined by a returning ex. Go figure!!!!!

Next Chapter, We will discuss how the Exes working together had an effect on Charah.