Don’t Blame Chuck Cast for No Movement on Movie

On January 27, some passionate Chuck fans made it a personal mission to trend the hashtag #Chuckmovie. A lot of people were involved. Bonita Friedency, who played General Beckman was also present for the event.

The 27th marked the three year anniversary of Chuck coming to an end. Several people like Richard (@ChuckVStheMovie @jdmitchell51, @brknakdg1903 and @chucksarahb all were instrumental in promoting the two hour live episodes. The episodes they watched were Chuck vs Sarah and The Goodbye.

Some of us including myself couldn’t find enough stones from within to watch the final two episodes because of the torture it does to the heart , but we were present for morale support with the rest of the Chucksters and newbies alike. We were putting screencaps, songs from the show anything to include the #Chuckmovie.

I applaud everyone’s effort because we did reach atop the list of trending topics on twitter. However, something bothers me and it needs to get off my chest.

This subject wouldn’t be the first time I have come out and expressed my disdain for harassing the cast of Chuck, and it was nice to read some tweets from others discouraging the practice, but I still see tweets like this

@ZacharyLevi be true to your fans, make that Chuck movie.

Now I wonder Chuckaholics do we tweet these things with the idea it will help matters because it won’t. Most of the time Zac ignores these tweets. His advisors also must instruct him not to speak his mind on the issue because everyone is looking for that sound bite. and paint him as a bad guy.  The truth is Zac isn’t a bad guy.

The truth is neither is WB or Chris Fedak, The problem lies with money and timing. Some have said it could be twenty years before a Chuck movie is possible. It’s been three.

The other problem we face is Chris Fedak’s feeling on the story being complete.  Here is a link to an interview he did with IGN. http://www.ign.com/articles/2012/01/28/chuck-creators-post-finale-discussion

Chris’s thoughts on the finale, I don’t know about you but final chapter means its done.

Fedak: It’s a mix of emotions, but we’re happy that we were able to tell the final chapter of the Chuck show.

The cast of Chuck are some of the best people walking Hollywood, and it’s not even close. They represent everything that is right about Hollywood, but since some fans don’t get daily updates about a movie their method of voicing their desire is by leaving nasty messages on their social media walls.

If you don’t believe Zachary Levi isn’t interested in making a Chuck Movie here is a clip on that very issue.

Here is a clip from Yvonne Strahovski,

Two of the top stars have said, they would be willing to do a movie, but both said it’s up to the powers that be with that said. People are still going to flood their social media accounts and Instagram accounts with comments that hurt my eyes in disbelief.

Last year, Zac spent two hours on social media conducting live chats with the fans. Yes, it was to promote his fundraiser, but he answered everyone’s question. Do you think Angelina Jolie will even have a thought in doing such a thing.

As much as I would love a Chuck movie, we have to walk down memory lane on how fortunate we were to get 91 episodes to begin with. Chuck was very luck with the drive of the fans and creative methods in funding the series,The sandwich franchise Subway helped the show tremendously. 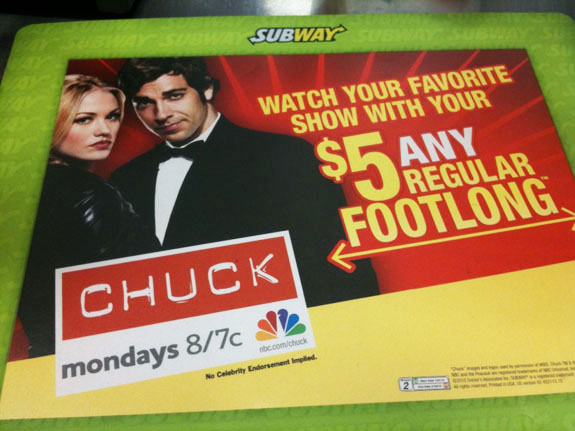 In a newspaper article titled, ” Upfronts: ‘Chuck’ Saved by Subway.” Mr. Carter wrote “But NBC executives made clear on Tuesday that the renewal came about mainly because of an advertising partnership that was suggested to Ben Silverman, a chairman of NBC Entertainment, by Subway executives, who were enthused about the special marketing opportunities the show afforded the company. Subway sandwiches played a role in an episode of “Chuck” last month, with a Subway slogan as part of the dialogue.” (Carter, 2009) Here is a link for you guys can read the article for yourselves.

This happened in may of 2009, which means S3 was saved. S4 went through the same situation after the terrible ratings and fans angry with the story they witnessed in S3.  A lot of fans never returned.

S5 was a gift from the network, and they only had 13 episodes. Most fans would tell you the wedding was the best way to sign off, and after how the fifth season went down even more so. Don’t get me wrong there were many fans that loved the ending, which is fine with me.

The struggles the series face wasn’t only being on the chopping block, but budget decreases also didn’t help matters. Stars like CS Lee, Julie Ling and even Matt Bomer left the series because of those very cuts or better opportunities. 91 episodes was a pipe dream that became reality.

It became a collective group effort from the fans and the cast in working together whether it was the constant mention of Call of Duty or other means to gain sponsor dollars, and thats the name of the game money. Warner Brothers has the right to cancel a show if they deem it none profitable.

The other problem for the series was no one watched including me. I became a fan after watching it on Netflix.com The new fan doesn’t appreciate the show as much as those that watched week to week is the argument those fans make, but I beg to differ.

The story doesn’t change, we binge watchers can get through a season in one day, which is better than waiting week to week in my view. I don’t like advertisements and promotions of products I will never get to afford. It still doesn’t give the new fan clearance in badgering the cast on the lack of movement on a movie.

Don’t blame Zac, Yvonne, Adam, Sarah and the rest of the cast. Don’t constantly tweet them asking for updates. The best way to show support is by watching their other projects. Why limit yourself just to Chuck.

Did you guys know Adam Baldwin is working on a television show called the Last Ship or Scott Bakula is on NCIS New Orleans. A friend of the site, producer Robert Duncan McNeil also has been working lately on various projects. Robert is very friendly with fans on twitter. I had the privilege to talk with him a couple of times.

Don’t forget ladies and gentlemen these are human beings, and with that don’t own us anything in return. They provided entertainment for us, and while the show was great, at the end of the day. We are a very lucky fan base.

Kristen Bell may be known for Frozen, but the rest of the world knows her from Veronica Mars. It took seven years for the television show to gain a movie. We only been off the air for three.  It also is worth noting Heroes was cut the same year as Chuck, and that series is getting a reboot.

Chuckaholics be patient. be nice and most importantly be classy. The cast is a very friendly group of people. When news comes about a movie, we will know.

Until then enjoy the 91 episodes we already have.