During the course of watching recent release DVDs, I stumbled along the movie American Ultra. I know you’re wondering what does the movie have to do with Chuck. Well, there was a member of the Chuck family in this picture.

Chuck Alum Tony Hale plays Petey Douglas. A CIA Agent who assisted field operatives from Langley. He would be ordered to fly a drone or send a weapons package using coordinates given from the agent.

The movie stars Jesse Eisenberg, who I am becoming a big fan of as a performer. His co-star was Kristen Stewart. The movie is about how Jesse Eisenberg’s character Mike Howell, who comes off as a Morgan clone with the exception being always getting high. Mike was a CIA Assassin, but one that didn’t know was a walking program. Does that sound familiar? 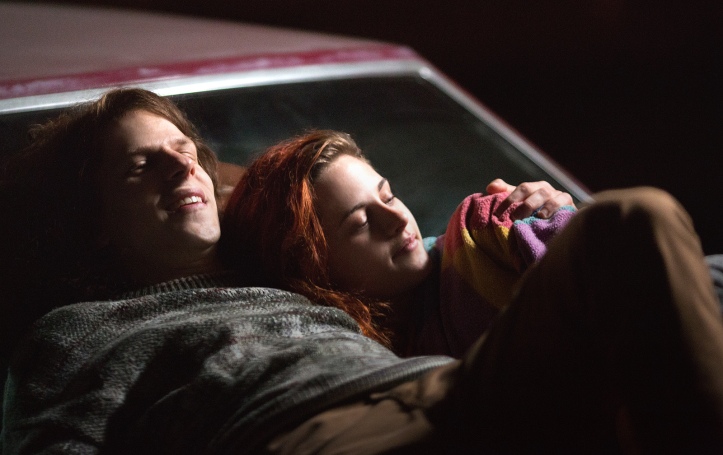 Chuck was a walking program. The issue was Howell had no issue in killing. Kristen Stewart Plays Howell’s girlfriend Phoebe Larson, but there is more to her than it seemed. Larson is actually a handler covering as Howell’s girlfriend, but like Sarah Walker falls for her asset.

As the story goes, Howell was stuck in a small town. He suffered from panic attacks that would make leaving impossible.  It would be apart of a plan set forth by the CIA to keep Howell from leaving. In other words, Howell was a very dangerous man.

However, Howell kept trying to leave which made the agency decide it was time to eliminate Howell. The person in charge of the Ultra program was played by Connie Britton (Lassiter), who like Beckman was in S3 closed down the program. It was deemed too dangerous. Thus, Topher Grace’s character hired a hit team to do what Casey was supposed to with Chuck.

The head of the agency played by Bill Pullman informed Lassiter about the hit, but was ordered to stand down. Lassiter didn’t listen to the order. She would come to the town in which Howell was living. Her purpose was to activate the Ultra Program so Howell could defend himself from the hired guns to kill him. . She walked into a small town convenience store in which Mike worked (much like Sarah did in the Buymore) and activated the program by using choice words that would trigger the program into motion.

The movie has very similar themes from Chuck and Bourne Identity which makes the movie worth watching, but I caution in watching multiple times.

Another star in the movie was John Leguizamo, who I can’t stand. He sometimes comes off as trying to hard for me.