The Bryce and Chuck Puzzle

When we first meet Charles Irviing Bartowski, we saw a man and his friend named Morgan fleeing Chuck’s birthday party. Chuck and Morgan explained to a woman why they didn’t fit in with the doctors that were partying in the courtyard set up by his who turned out to be Chuck’s sister and her boyfriend.

The best way to depict Chuck was a man who extremely settled due to his circumstances.  Chuck allowed his past to swallow him up despite being super smart which was an asset for him. A nerd herder by trade shows he was an electronic savant, which will help Chuck throughout the series. As they are playing their games or with a group of women, Chuck presents himself as a need for a spark to rejuvenate him.

Chuck’s mindset steams from his days in Stanford and his ex girlfriend. Most of us have dealt with someone from our past that made life hard for us to move on. Simple conversations with people from the same school bring back painful memories about Bryce Larkin and to extent Jill Roberts . It almost like Chuck couldn’t get closure since he was constantly reminded about these events.  The track star or the one who gets the girl all the time haunting Chuck’s life over and over. In Chuck’s position, it can become a burden especially not knowing the truth. The truth is Bryce Larkin was Orion’s right hand man using techniques we will see later with passwords only the person would know.

Chuck’s life is harder than that because his sister became his mother and father at an early age. Chuck’s morale ground was established because of  of his sister Ellie. What Ellie couldn’t do is restore Chuck’s confidence and ability to charm others like she knew he had in him.

It can be said, Chuck was going down the route of Stephan Bartowski when the people you trusted ruined you how could you not? Stephen had similar issues with the government and Volkoff taking the woman he loved because of the Intersect. The question of who can you trust becomes real as real can be.

The story of life sometimes effects us in different ways. Change will happen but it depends on how we embrace those changes. For Chuck, a confidence booster was needed and since he hated Bryce Larkin.  Who would of thought Larkin would be the one to open that door. Chuck was important and soon hero. Bryce forced that change when he sent Chuck the Intersect. Bryce’s trust in Chuck was paramount when sending government secrets to a civilian which changes the dynamic of the relationship.

As far as Chuck was concerned, Bryce became an adversary and since Larkin was working with Orion at this point, Bryce was walking a fine line between stopping Fulcrum and handling Chuck at Stanford. Thus, Bryce Larkin was not a bad guy. He knew he could trust Chuck enough to send him the program despite trying to keep him away from the CIA crosshairs which is an A in my book. It means Bryce was in a middle of a fight and on his own sound familar? Sarah performed the same way. Once Langstan Graham recalled her Sarah operated on her own so essentially Sarah and Bryce were working on parallel focus. It shows how great of a unit Larking and Walker truly were.

The early part Of Chuck and Bryce’s story makes the beginning of this story interesting. What do we know about Bryce? We get the back story from Chuck’s perspective, but there are three parts of a story one including the truth..

In the Pilot of Chuck, we saw Bryce get killed by John Casey for conducting a rouge operation. Therefore,  Bryce was gone leaving Chuck and Sarah in limbo. Sarah and Bryce were partners and in a relationship. The Andersons were a real couple despite  being their cover on missions. It establishes the triangle effect of Chuck, Sarah and Bryce, but there is a fourth in this equation that makes this a true love story. The only love story from the series I like the most.  I have to factor Jill Roberts into the story because after all Bryce introduced Bartowski to Jill. Fulcrum is major contributing factor for all four components and sometimes that is all it takes. Sarah, Chuck, Bryce and Jill will forever be linked good or bad.

Bryce is an efficient spy. He breaks into the Intersect room and destroys the computer.  Escapes from inside the CIA facility only to run into Casey. The first key scene in the relationship of Chuck and Bryce begins with a line Larkin says “Its hard to say goodbye.” 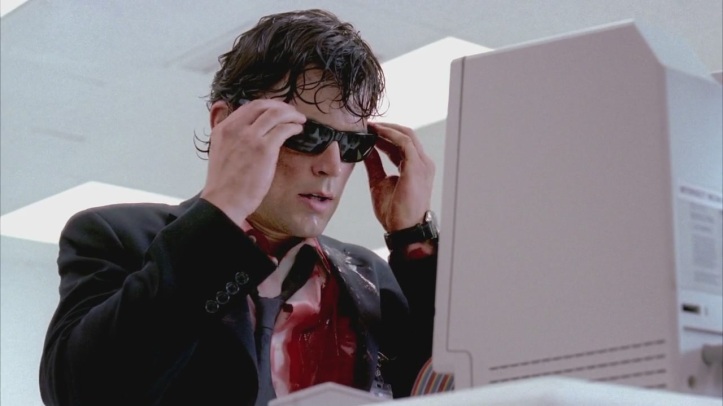 There are significant difference between Bartowski and Larkin when it comes to feelings. The way Bryce shuts them off for missions, but there are nonverbal communication that shows Bryce Larkin was a real friend. Chuck Bartowski could solve computer problems while maintaining that moral fiber that attracted him to Bryce and later Sarah. Casey will always be about the mission. He is an operative with a high rank so appearances and duty will be is makeup until his daughter Alex comes along.

The other question to examine was Bryce Larkin also Chuck’s first handler. The question of why Bryce and Chuck met at Stanford has always crossed my mind because its important. We saw the lengths Bryce Larkin would go in protecting Chuck from becoming a field operative.  Sarah Walker would inserted herself into Chuck’s life in similar fashion. Her goal was to protect Chuck not only from the government, but himself as well. Chuck’s emotions often got the best of him.

Furthermore, Sarah went to great lengths to protect Chuck in becoming the spy Bryce feared. When Chuck entered both Bryce and Sarah’s life, the more they saw Chuck was a great person with a big heart which separates him from Bryce.  Bryce tried to teach Chuck about the vulnerability feelings bring to the table. It could cost agents lives. The other person to say that same sentiment is Daniel Shaw. Casey admits it in Honeymooners about making decisions when it came to friends and family.

On the surface Bryce looks egotistical. It comes off all about Bryce, but it wasn’t about Larkin. It was about preventing the Intersect from getting into the wrong hands. Orion knew Bryce would think as a spy he could trust to destroy the Intersect while protecting Chuck from the very world he knew would kill Bartowsk soul. Bryce would force Chuck to enter was a decision I am sure Larkin had no intention of doing, but with the agency closing in Larkin had to act fast.

Chuck’s issues with Bryce would continue once Chuck opened Bryce’s email. The change to Chuck’s life would be tremendous no longer was he just a guy working at the Buymore. He was working with his former partner and girlfriend Sarah Walker and the guy who shot him in John Casey. It truly shows how one decision can bring people together all for the same reason.

However, we can’t just assume all of its bad when talking about Bryce and Chuck. They show like they have bonded. Chuck and Bryce playing darts in the library of Stanford. Bryce introduces Chuck to Jill. All of these scenes don’t show signs Bryce had it out for Chuck.

Bryce being recruited to the CIA earlier than Chuck was proper because it shows Larkin protecting Chuck from the CIA because he had the experience. The very CIA that eventually would work with Chuck because of him.

Thus, we begin to see the construction of one Charles Carmichael. A hero in more ways than one, but while covers are just that Charles Carmichael may have the Intersect, but Chuck Bartowski was just as great everyone knew it just not Chuck himself.

This marks the beginning of my new series. I hope you enjoy it and remember it’s hard to say goodbye because we didn’t.