gallery Chuck vs The Pilot: Season One Episode One

It’s been six years since I last wrote an episode article and it comes time to refresh the memories. Like most,  I found Chuck too late to experience what it was like to watch Chuck on a weekly basis, but I still was able to have the same emotions as many who watched during its run.

Chuck Bartowski, a computer nerd, was seen trying to escape his room. While saying “Im uncomfortable with the plan.” Morgan was helping Chuck escape his birthday party organized by his sister Ellie.

Ellie forced Chuck to mingle with  “real live women.” she set up, but while Chuck was being submerged in a sea of doctors and medical staffers. A man was entering a room with a single computer.

The man was covered in blood and sweat as he was working fast. Bryce’s name was heard from the agents trying to break into the room. In the meantime, Chuck was just trying to choose a font when the conversation turned about his future. A future that would change once Bryce broke out of the building.

There is something to be said when you watch a man wallow in his self pity. It’s true when it comes to being a turnoff but we aren’t talking about some small thing here. As Bartowski explains his experience meeting his ex girlfriend. The scope of pain heals faster for some, but for Bartowski  the healing process took longer. He still hasn’t overcome the pain of  Stanford even if it was five years ago.  People can tell him it was time to move on, but its not as easy.

While playing video games, Chuck received an email from the aforementioned Bryce Larkin. Morgan could be considered an enabler in sense not for not trying to push Chuck, but rather settle for a night of video games. However, my personal experience It was preferred than mingling just for the sake of mingling.

What was cool about the pilot was Chuck’s future was coming. The NSA/CIA with John Casey were discussing what the computer did. The Intersect was designed for the purpose of sharing Intel. The computer was how it was done.

Let’s take the concept away for a moment, Chuck’s future was on its way. A lot of pressure and high demand of Chuck was liniment. The start came in the shower as the computer started to flash secrets. Chuck unaware of what was going on went to work like any other day.

He continues to flash even while explaining the computer virus to his Nerd Herd team which was known as the Demova Virus. The interesting aspect was Chuck wasn’t showing signs of freaking out, but confusion. Casey was on his way, but a certain blond enters the story, which will change Chuck’s life forever.

One of the reasons I started Chuckaholics was to comment on the Ballerina scene. There was a lot here we all can discuss which was the question when did Sarah fall in love with Chuck, but it is hard to believe a woman coming to the Buymore would fall so quickly. 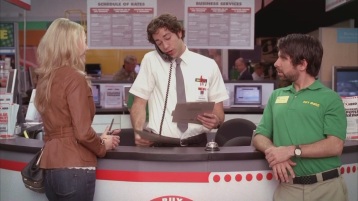 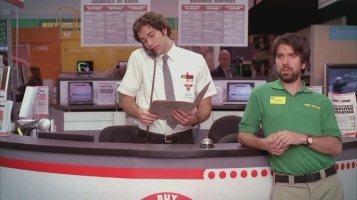 There is no mistaken Sarah went in as a CIA Agent on orders, but when Sarah left the Buymore both Chuck and Sarah’s lives would change. Chuck showed what a lot of men would do if a beautiful woman like Sarah was standing before them. I know I would freeze up. Nerves would creep up and for Chuck he fumbled his phone like it too. Sarah asking for phone assistance which was fun to see because of her watching Chuck as he explains her phone issue.

Sarah was working Chuck. She knew what a file told her, but what a file doesn’t present is real life emotions. Real life interaction with others. As the ballerina and her father approach all of Sarah’s preconceive knowledge of Chuck would be just a file. Words on a paper nothing more.

The ballerina was nothing more than an ice breaker. The proof was Sarah continuing on mission. Sarah trying to steal Chuck’s computer showed she was still being what will be refereed as Agent Walker during the rewatch.

She was impressed with Chuck’s heart and became attracted to Chuck because he was able to send serious blow to the wall that surrounded Sarah’s heart. How do I know because of this expression.

What caught Sarah off guard was not Chuck himself, but what Chuck did for the little girl. Sarah was used to con men, terrorist just bottom of the barrel scum with no heart, but what Chuck gave Sarah was a glimpse into kindness. The father didn’t use a tape, but rather send the little girl and her father away Chuck helped them by filming her dance.

It broke out the first real emotion from Sarah, but it wasn’t enough for her to protest her love for him at that point. 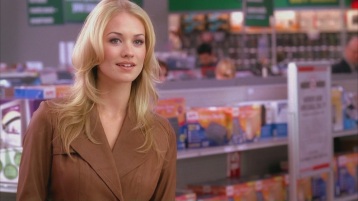 The planting of roots

After the computer was destroyed, Graham recalled Sarah. She used all kind of excuses to stay. “What if he has a back up,  and I can fix it.” Fix what? As I mentioned in previous articles, Sarah followed orders until now. She wanted twelve hours to solve something she saw destroyed.

However, the knowledge of Casey coming made Sarah become the protector. The very protector we know would be Sarah’s make up. The early signs of feelings for Chuck. If she was strictly about the mission then protecting Chuck was a non starter, but because she witnessed his heart in action doubt crept into Sarah’s brain.  It created a new mission for Sarah. Chuck was her mission.

So, the first question of the rewatch I pondered. Why was it important for Sarah to know why Chuck didn’t call? Communication between the two on a mission basis isn’t important but while the question may be a work, it wouldn’t be strictly work related because after Sarah asked  Chuck, she looked like this.

Whether it was a tease or not Sarah was working both as a agent and a woman. She was genuinely interested in why Chuck didn’t call. It was not only my thinking because Morgan asked the question for me. Thus, the mission was not only for the government but for herself as well.

In my opinion, Sarah didn’t want to go anywhere the part of setting roots began and the more she worked with Chuck the more she did feel home, but we will see that more along the way.

There was more evidence Sarah was still in agent mode as she is preparing for their date, Sarah was gearing up. She knew Casey was coming so she had to gear up,  but that didn’t mean Sarah couldn’t be on a date because in a future episode Sarah considered this date as a real date, which shows the depth of root setting Sarah was doing.

I believe Sarah when she states that she was looking for a change of pace. There was a song played during the date scene. Gomez’s See the World was playing and there were lyrics that fit the scene.

Chuck and Sarah both were seeking a dream of purpose of resolve from their current state of mind. The best future is one that makes people have to change from the norm. Chuck having the intersect meant the stagnate life of working at the Buymore would be a cover for the real work he was set to begin. The shadows were their for Sarah as well. A world of violence, deception and orders was taking its toll on her as well because of the final song of the episode.

The Shin’s Comet appears comes at the right time. This story isn’t about the other characters. Its really about Chuck and Sarah. The ultimate underdog story.  Sarah is a hero because she turned Chuck’s life around from self pity.

Chuck turned Sarah’s life around by giving her a sense of purpose in the real world. From the beginning Sarah wanted to take care of Chuck,.

The numbness is the unknown. Why did Bryce send the Intersect to Chuck? Why did Sarah set roots so early?  Chuck already showed he can handle the spy world by defusing a bomb using a computer virus.

The truth is Sarah was already in Burbank for seven days because as Chuck said on the roof “my computer broke a week ago.” Sarah was recalled but wanted to stay.

As far as Casey goes, He was a solider first and for most. Thus, orders and missions was his life. Sarah and Chuck have similarity with both being forced into this world. Bryce sent the the spy world via email to Chuck.

I shall explained my theory when the time is right, but for now this ends my first episode recap.

How long were you here, “All night.” However, Sarah wasn’t there all night she was in Burbank for a week already, \

Next episode we will discuss what Sarah said at the end. “Trust me…. Chuck.”