Normally, I talk about the entire episode and focus on the key scenes, but in this episode we learn a lot about Sarah in this episode, and to an extent maybe Casey isn’t as blind about what was happening between Chuck and Sarah’s on going courtship.

The ending of this episode taught us no matter when or how we can never lose sight of the past. In other words,  there really was never an escape from those who were responsible for the future. A package believed to be a bomb was being transported to Burbank. Team Bartowski’s mission was to stop it from exploding, but the explosion would be the return of Bryce Larkin, who isn’t as dead as we thought.

Meanwhile, Yvonne Strahovski acting in this episode really brought Sarah Walker to life. First, we should discuss what happened in the previous episode. Chuck broke off the fake relationship, but what really sold the scene for me was what Sarah did after Chuck left. Sarah watches Chuck head over to Lou.

Sometimes I wish we were able to see what happened in between episodes because as was revealed in Season Five. Sarah was really effected by this break up because when she entered the Buymore she isn’t her normal pretty self.  Her hair is flat and there was visible angst in her expressions. No makeup to be found.  Details like these are for those who pay attention to Sarah even more. Don’t believe me than watch Sarah before these two episodes look at how Sarah presented herself for a cover girlfriend. 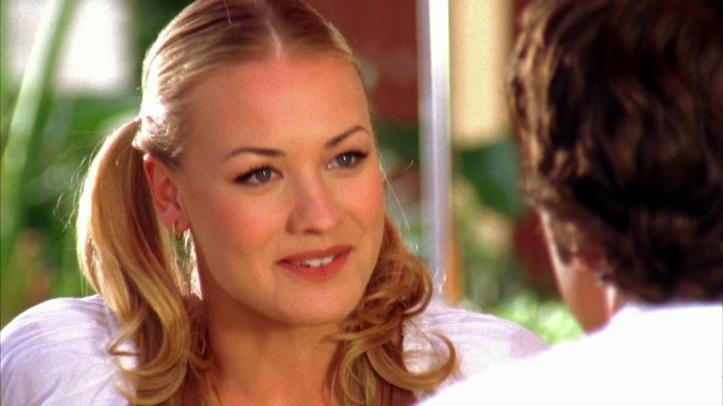 Sarah was spiraling because what we have discussed so far, nine episodes in, we have seen Sarah set roots into Burbank. The question if Sarah was into Chuck was long gone in Chuck vs The Truth. The company girl was still in control up until this point, but family game night. A jealous girlfriend sleepover. Sarah was losing herself within her cover.

Thus, when we see how Sarah depicted. Sarah using Agent Walker as a ploy to cover her dismay in losing Chuck. Tears are forming in her eyes as she is pleading for Chuck to reconsider. Moving forward, I will point out the brilliance in Sarah masking her real feelings for what will now be a cover of her real feelings from the agency.

Sarah bothered by Lou to confront her which Agent Walker wouldn’t do because it would expose her cover. When she heard Chuck and Casey talkin a rose was used on his date with Lou, Sarah shows how hard this was getting for her. Her actions was now pointed out by Casey.

Casey: Same bit with you,  you fall for the guys you work with.

Sarah heated by the stone cold killer Casey spotting her feeling for Chuck on top of listening and watching Chuck with another woman. Sarah Walker was a combustible element.

What follows was where I began to see the formation of a woman who realizes her relationship with Chuck wasn’t fake. Her ability to not crack as Chuck kept yelling at her and Casey about not being allowed to have a real relationship. You can tell by Sarah’s eyes she was eating a lot of crow.

The pressure of the entire episode was building for Sarah Walker. The constant reminder of Chuck wanting a real relationship was weighting heavily on Sarah so much so when the two bicker during the closing stages of the episode, we saw Sarah being defensive when the top of Bryce came up.

The question of jealousy was never the issue, but I beg to ask why Chuck needed to bring up Larkin when Bryce wasn’t even a thought? It shows how insecure the two are when it comes to emotions. Sarah can get just as emotional as Chuck.

The build for the kiss really took two episodes to happen. Sarah thinking the package was a bomb ordered Chuck to leave, but he refused. What is interesting is the last thing Sarah wanted to remember was kissing Chuck. A great moment in all of the series. A gross one for Yvonne as well. Philly Cheese steak problem indeed.

The Past Returns from the Dead

When the package revealed Bryce Larkin alive, we see why this arc would establish Team Bartowski because of the impact Larkin has with all three. Former friend, lover, and kill for John Casey.

What happens in the next episode will be where I discuss more about Bryce’s sacrifice in a bigger analysis than anything Chuck had to give up.